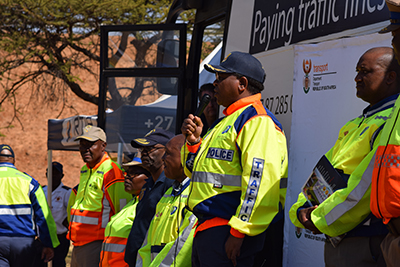 Minister Mbalula said this when he was speaking to motorists on the N1 north near the Carousel Plaza during a road block on 18 August 2019.

“During the Transport Department budget vote speech, this administration made a promise to road users that in the spirit of Khawuleza, we will expedite service delivery and deal decisively with lawlessness on the road in a bid to drastically reduce road fatalities. The signing into law of the legislation has brought that promise to fruition.

“It has been a long time coming since the amendment bill was developed in 2013. The bill was approved by Cabinet and tabled in Parliament in 2015. Thereafter it was engaged upon by the portfolio committee on transport,” he said.

The President of South Africa, Mr Cyril Ramaphosa has signed the Aarto Act into law.

The Act brings with it new provisions of the road traffic law such as the addition of the electronic serving of infringement documents, setting up of the points demerit system and creation of rehabilitation centres for habitual infringers.

The demerit system will see each driver starting on zero points and earning a certain number of demerit points for each violation of traffic law. Once they reach 12 points, licences will be suspended.

The Aarto Act will be implemented after it has been promulgated and published in the Government Gazette.