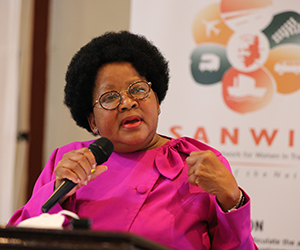 Deputy Transport Minister Ms Dikeledi Magadzi acknowledged the role played by the hero of the struggle, Ms Charlotte Maxeke and her contribution towards investing in women through the empowerment of women through educating women on topical issues.

“She fully and correctly understood that without education, we shall not truly be a free people capable of complex developmental practices meant to reverse centuries of colonial oppression and exclusion.”

Ms Magadzi said this during the Northern Cape’s South African Network for Women in Transport (SANWIT) conference in Kimberly. The conference took place from the 28th to the 29th of April.

This year’s SANWIT conference programme was guided by the spirit of the mother of ‘Black of Freedom in South Africa’ whose life and time is being celebrated this year as declared by the government.

The Deputy Minister noted that although South Africa had made strides in the advancement of empowering women since 1994, evidence indicated that for there to be women empowerment women have to seat as political and public sector representatives, they must be in legislatures and must have equal access to services and education.

She conceded that the pace at which change was occurring has been insufficient to ensure gender equality and achieve gender societal transformation goals.

“It has been acknowledged that this is attributable to a multiplicity of factors, including the persistence of the economic exclusion of women and Gender-based Violence and Femicide (GBVF),”