Profile of the Director-General 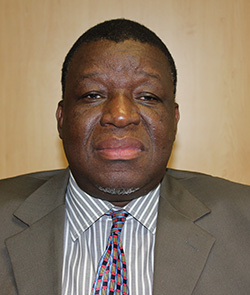 Mr Pule Godfrey Selepe joined the Department of Transport as Director-General on the 1st of March 2015.

During the period 1990 - 1996 he worked as the Coordinator for Aviation Policy for the African National Congress where he was responsible for, among others, development of policy guidelines for the ANC; financial management and reporting and participation in the development of the RDP. He was seconded to SAA as Economic Consultant from 1993-1996 where he was involved in the negotiation of commercial agreements; attendance of bilateral air services negotiations with foreign states and researching the global aero-political landscape.

After the SAA secondment he served as Director: Land Transport and Civil Aviation at the Limpopo Department of Transport from 1997 -1998 where, among others, he was responsible for land transport policy and planning; provincial passenger transport system i.e. bus and taxi operations (taxi permits and bus subsidies) and management of road traffic safety operations, including Arrive Alive.

He joined the National Department of Transport in 1999 as Director for Air Transport and was later promoted to the position of Chief Director: Civil Aviation. He was responsible for negotiating bilateral air services agreements with other States; ensuring a smooth administration of the licensing and permit system; management of implementation of international instruments and protocols and coordinating research and development on pertinent aviation topics.

He also oversaw the Airports Company South Africa, Air Traffic & Navigation Services Co. and the South African Civil Aviation Authority. He also served as chairperson of the International Air Services Council. From 2005-2007 he worked at South African Airways (SAA) as the HOD (Vice President) responsible for Alliances and Aero-political Affairs.

His duties included among others, human resource and financial management; strategic and business planning; government and industry liaison; negotiating cooperative agreements with partner airlines and integrating SAA into the Star Alliance. Mr Selepe briefly rejoined the Department during 2009 to 2010 as Coordinator of the 2010 FIFA World Cup Aviation Task Team.

He was responsible for, among others, development of the aviation strategy for 2010 and consolidated operational plan as well as liaison with stakeholders such as Airports, FIFA, LOC and Host Cities. After the World Cup assignment, he pursued a business venture as Managing Member of SPG Aviation and Consulting until his appointment as DG. The business focus was management
consulting in the areas of Business Planning; Change Management; Integrated Development Planning; Policy formulation; leadership and strategic planning.

Some of his career highlights include the following:

Mr Selepe matriculated from Seshego High School in 1979 and went on to obtain a Diploma in State Finance from the University of Limpopo. He also holds a Master of Management degree in Public and Development Management from the University of the Witwatersrand. He has certificates in Macroeconomic Management (World Bank); Strategic Management (Henley) and Current Aero-political Issues (IATA). He has addressed numerous international forums and has written articles for prestigious international journals. Mr Selepe has previously served on the boards of directors at Great North Transport and Gateway International Airport.