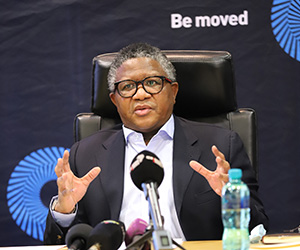 “We call on all of you South Africans, to be vigilant and true patriots by ensuring that you partner with us in protecting our country’s infrastructure.”

These were the words of Transport Minister, Fikile Mbalula during an oversight visit at PRASA’s vandalised train stations around Johannesburg. The minister used this time to urge South Africans to report all those who destroy and steal railway compartments.

“We often refer to this infrastructure, as government infrastructure, this is a misnomer; this is public infrastructure that we must guard jealously ourselves by ensuring that we report all those who sabotage our efforts by stealing and destroying it,”

“This is all our fight, let us join hands and uproot all these criminal elements from our communities. It is in our hands now.”

Minister Mbalula said the vandalism and theft of rail infrastructure had been occurring for a longtime and it became worse during the Covid-19 lockdown.

“The impact of the COVID-19 restrictions exposed the vulnerability of our network, resulting in occupation of the rail reserve by people who built illegal settlements on the tracks and inside the reserve. This was further exacerbated by the wanton destruction, theft and vandalism of our infrastructure,” said Mbalula.

The Minister continued further, stating that part of the problem that led to the vandalisation of the railway infrastructure at PRASA’s stations was as a result of the termination of security personnel’s contracts at the agency.

However, there is a lot of work that is happening behind the scenes in order to reverse the situation. To address this issue, in September last year PRASA developed an Integrated Security Plan.

The plan was informed by the Intelligence Driven Operations, Regulatory Environment and PRASA’s security response. PRASA adopted a strategy of having a fully-fledged in-house security within the next three MTEF periods. This will be achieved through a phased-in approach. In the first phase, 3100 security guards were insourced.

Another measure that was introduced in order to protect the railway assets, is the Peoples Responsibility to Protect (PR2P) programme. The PR2P programme is a community mobilisation strategy that involves communities in crime prevention partnerships with PRASA in different regions.

The Minister said: “PRASA’s Business Intelligence, with the help of other Law enforcement Agencies and the South African Police Services (SAPS), continue to work around the clock to curb this escalating criminal activity through random and continuous surveillance and monitoring of the scrap dealerships alongside Metrorail operational areas.”