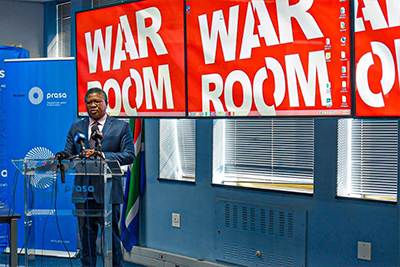 At last there is hope for the train commuter’s woes as the Minister of Transport Mr Fikile Mbalula launched a Prasa War room on 08 August 2019. The War room was launched in Umjantshi House in Braamfontein.

The Minister during the unveiling said the War Room was a ‘culmination of a commitment we made to move with speed in addressing critical challenges in our passenger rail environment’.

“The War room we are unveiling today will be a game changer through which we will aggressively improve the quality of our passenger rail service. This War Room is about the people and a key measure in delivering on our commitment to improve our public transport system.”

The War room is a physical space that enables those who are deployed there to make rapid decisions based on the information they gather from the operations on the ground on an hour by hour basis. Giving details of how the War Room would operate the Minister said it will be supported by a Technical Team made up of experts with in-depth knowledge and experience in a number of areas, which include train operations, signaling, rolling stock and security.

“The War Room will focus on 3 areas that are Service Recovery, Safety Management and Accelerated implementation of the Modernisation Programme,” said the Minister.

A day after the War Room started to operate a slight improvement in metrorail’s performance has already been seen. On the first day of its operation, 78% of scheduled train trips ran with 53% of them running on time. On the second day the figures rose to 86% of scheduled train trips running and 73% of them running on time. Talk about the light at the end of the tunnel.