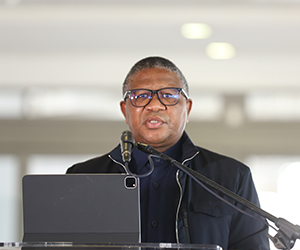 The approval of the White Paper on National Rail Policy by cabinet in March 2022 marked the beginning of a new chapter for South Africa’s railway industry.

These are the words of Transport Minister, Mr Fikile Mbalula during his keynote address at the industry stakeholder engagement held at the Passenger Rail Agency of South Africa (PRASA) Rhodesfield station.

The Minister told the stakeholders that the objective of the Department of Transport is to unpack the White Paper on the National Rail Policy and explore the ambitious policy choices made to bring about the rail renaissance.

Elaborating on the White Paper, he said: “The document creates policy certainty that introduces radical structural reforms, which enable broader participation and open new avenues for investment and competitiveness,”

“A key element of this is the opening up of space for private sector investment and effective economic regulation that ensures fair and regulated access to both primary and secondary networks,” he told his audience.

It also emerged during the Minister’s address that the government’s interventions to achieve a railway renaissance the positioning of rail as a key contributor to economic transformation and the reduction in harmful greenhouse gas emissions are clearly articulated in the policy document.

“Current challenges of theft and vandalism of critical rail infrastructure disrupt economic developments in the sector. The corporate sector needs to find constructive ways to deal with issues of crimes, theft of scrap metals and other criminal activities that sabotage the country’s economy and growth of the sector.”

The government has committed itself to ensure industrialisation and local production of steel, railway lines and supplies, and promotion of rolling stock through policies that will need both state and private operators to procure all supplies from South African based manufacturers.

“In implementing the policy, the Department will establish a working group consisting of government, the rail industry and state-owned companies to co-ordinate the critical path of implementation and periodically assess progress in implementation,” concluded the Minister.