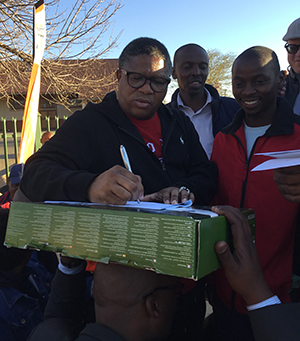 Transport Minister Fikile Mbalula met with bus commuters in Pretoria over their frustrations on poor bus services. The meetings took place on Saturday 20 July, in Hammanskraal, Mabopane and Atteridgeville.

This is after bus commuters from the mentioned areas handed a memorandum of demands to the Minister a few weeks ago.

In the meetings communities complained about the North West Star bus service - saying buses were always late and people have lost their jobs because of that. People also complained that the buses were old, unreliable, unroadworthy, always breaking down and not always available. Commuters also said that sometimes they even have to pay for diesel and toll fees for the buses.

The Minister did not waste time in getting to the bottom of the matter.

He said: “We’re looking at more or less 200 buses that will be rolled out within a period of four days. The solution for the commuters is to bring a new bus service , that’s what we agreed with the MEC and we will go for an open tender to allow people who want to bring a good service to do so.”

Minister Mbalula says the current contract comes to an end in April 2020. It won’t be renewed and a new service provider will be appointed.

He promised that in the meantime extra buses will be deployed and extra routes opened.