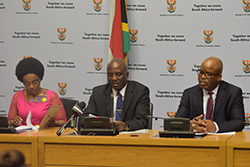 The Minister emphasized on SANRAL to develop Strategy-Horizon 2030 which include road safety plan and will review the new Toll Roads Policy. In addition, SANRAL conducted training for contractors in construction and maintenance which also benefited in creating 15 721 jobs, in the year of 2016. Furthermore, the upgrading of the Moloto Road is in process which will benefit in creating 12 500 jobs. The Moloto Road Project will cover a railway line with fourteen new stations and eight upgraded stations.

The minister of Transport highlighted on the new trains which are also known as “The People’s Trains” that 18 of them have been delivered and will be ready to operate. Furthermore, the department has procured 6000 bicycles that will be distributed to needy learners particularly in the rural areas, more especially to maximize non motorist learner to be able to access centres of learning.

Background (Department of Transport and Others vs. Tasima)

These issues arose in the context of a decision by the erstwhile Director-General of the Department of Transport in terms of which a fixed term agreement for provision of services by Tasima (Pty) Limited was extended for five years allegedly in breach section 217 of the Constitution and section 38 of the Public Finance Management Act (PFMA). Tasima sought and obtained orders from the High Court of South Africa, Gauteng Division, Pretoria (High Court), which enforced that decision. In some of the orders, officials in the department were held to be in contempt of court for their failure to carry out the enforcement order.

Feedback (Department of Transport and Others vs. Tasima)

Furthermore, the minister assured the citizens of South Africa that the government is now in full control of the electronic National Traffic system (eNaTIS). The constitutional court has ruled in favour of the department of Transport for the electronic National Traffic System (eNaTIS) to be transferred to Road Traffic Management Corporation (RTMC).

International Civil Aviation Organization is placed South Africa at position one in Africa and 33rd globally.

The Deputy Minister of Transport has emphasised about promoting safety inland waterways, which will help to control and regulate the boat activities in 60 000dams and 23 large rivers to curb the recurring accidents and incidents.

The deputy Minister went on to assure the citizen of South Africa to be aware that no train can operate without the approval of the Rail Safety Regulators.

The Deputy Minister highlighted on the fact that SACAA holds a zero accident record in the area of commercial area. Furthermore, the Auditor-General has for the fourth year running conferred a clean Audit Award to the SACAA.