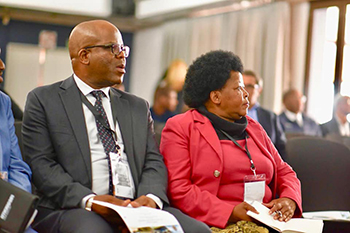 The Deputy Minister of Transport Ms Dikeledi Magadzi described a tour of the boat building process as ‘very interesting and enticing’.

The Deputy Minister was taken on a visit of the Robertson and Caine Ship Yard in Paarden Island, Cape Town on Thursday 11th July 2019 during which she was taken on a tour of the value chain process involved in boat building in South Africa for export.

Robertson and Caine is South Africa's largest boat-builder, manufacturing for the export market, and has delivered hundreds of boats globally.

Talking about her experience during the tour she said: “We need to work with the industry. What I enjoyed is the social cohesion. They reach out to communities and bring unemployed people to work with them" said Deputy Minister Magadzi.

We need to influence other government departments like Trade and Industry and the National Treasury that these are some of the institutions you need if you want to grow the boat building industry.” she concluded