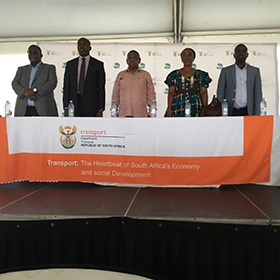 The Minister of Transport Dr Blade Nzimande together with the Deputy Minister, Ms Sindisiwe Chikunga distributed 120 bicycles to learners from low income households.

This happened during the Minister’s Imbizo in March in Vryheid, KwaZulu-Natal. The beneficiaries of bicycles included learners that walk more than 3km as a single trip to school. The learners that benefited hail from Elangeni Combined School, Sivulindlela Primary School and Mfefe Primary Schools. The bicycles are a part of the Shova Kalula bicycle programme.

During the Imbizo the people of Ngenetsheni amongst other challenges raised issues of poor maintenance of access roads, lack of scholar transport, construction of bridges and bus stops.

The Minister promised to engage with SANRAL to provide technical advice on how these conditions can be improved.

“We are gathered here with the full knowledge that there are numerous challenges still facing the majority of the citizens of this province, this city, and this community of KwaKhence as well as the surrounding areas. Our mandate is clear, Sithunyiwe. We are messengers. We have been sent to ensure we listen to the concerns of this community and seek all means to address them, in particular the concerns that revolve around the basic needs of this community”, said the Minister.