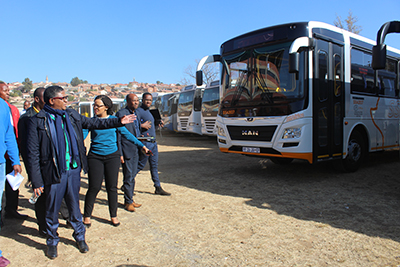 Minister Fikile Mbalula delivered 130 buses on 25 July, to the communities of Atteridgeville, Hamaanskraal and Mabopane. The event took place at Saulsville Arena in Atteridgeville, Pretoria.

The buses came as a result of the Minister’s intervention after he held meetings with the communities of these areas and heard their complaints that were mostly about the unreliable service that they were getting from the current bus service.

Addressing the media during the handover of the buses, the Minister said: “Given the state of these current buses we needed to take steps and go and open tender because the buses are moving coffins. Communities have been complaining about this for 10 years and nothing was done about it.”

“We are intervening decisively in a short space of time. I have attached myself as a Minister to this project so that we do not have to come back and address the same thing. We are in the Khawuleza mode now. I am not going to back off and I am going to personally see to the completion of this issue. There are 40 buses that are outside now that are part of this 130 buses that we have sourced.” said the Minister.

The Minister said the monitoring of the buses was going to be strengthened by the Gauteng Provincial Department and the National Department of Transport.