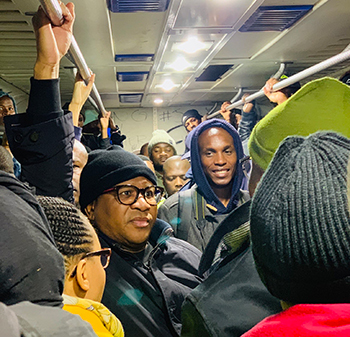 Minister Mbalula taking a train from Khayelitsha
to Langa

The Minister of Transport Mr Fikile Mbalula once more got to experience some of the challenges faced by commuters daily on South African train networks. A train delaying because of a cable problem. A fatality occurring during the train ride. Unions seeking the ear of the Minister. This is what Minister Fikile Mbalula was confronted with when he boarded a passenger train from Khayelitsha to Langa in Cape Town, in the early hours of Tuesday morning.

The latest incident follows hot on the heels of the train ride the Minister undertook with the President of the Republic, from Soshanguve to Mamelodi, ahead of the general elections, which resulted in a two hour delay. The incident happened prior to his appointment as the Minister of Transport.

The Minister braved the cold weather in Cape Town on 25 June 2019, to hear and see for himself what train commuters go through daily on the Cape Town’s mainline.

Everything that had the potential to go wrong on the train network did go wrong during the Minister’s trip. One of the more serious incidents includes the passing away of a child that forced the train to stop before reaching the desired destination, Ilanga Train Station. The Minister was forced to disembark at the Philippi Train Station due to the delays.

He was then whisked to Ilanga Train Station where he addressed members of the media, and where he was presented with a memorandum of grievances from labour formations and community-based commuter associations.

Addressing the media after the train ride, Minister Mbalula said: “Vandalism, overcrowding and security issues have worsened. The system is in deep crisis. There is a lot that still needs to be fixed.”

"This is a crisis," he said. "It is clear to see that there are problems within the entire structure of this transport system."

"We will increase safety on trains and protection of trains," he pledged.

"We all need to work together to fix this problem," he told the media.

The Minister also vowed to address the concerns raised by labour fomations and community-based commuter associations after consulting broadly with stakeholders within the rail sector.