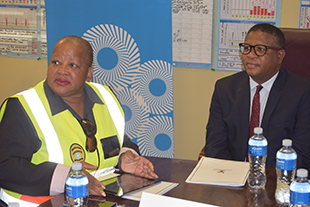 The Minister of Transport Mr Fikile Mbalula assured South Africans that ‘we will do everything in our power to ensure that safety in our commuter rail environment improves in a sustainable way’. Click here for Ministers statement

This emerged when the Minister was releasing the preliminary investigation report into the Eerste Fabrieke station collision where a new Prasa train collided with a Freight Rail temping machine. In the incident 64 commuters and 2 crew members on the temping machine were injured.”

The Minister released the findings at Wolmerton train depot near Pretoria on 05 June 2019.

“It is time we inculcate a culture where we all understand that safety is a collective responsibility. It is only when we work together and respect safety protocols in our railways that we can save life and limb. Safety in our railways is paramount and conduct that places the lives and safety of others at risk cannot be tolerated.”

He said operators had a responsibility to ensure that the infrastructure and rolling stock are adequately maintained and are kept in an acceptable state of repair and also urged the commuting public to respect all safety protocols within the railway environment.

Based on the findings of the preliminary investigations that amongst other things found out that:

The Minister then said: “We have to ensure that a culture of consequences management becomes a norm and incidents that could have been avoided do not go unpunished. This is equally true for those who sleep on the job and allow infrastructure to fall into a state of disrepair that exposes the public to unsafe conditions.”