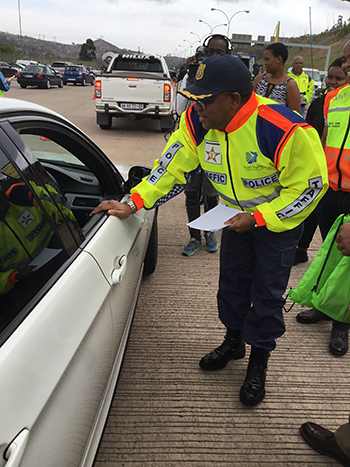 Transport Minister, Fikile Mbalula, has issued a warning to motorists who break the law that they will face prosecution.

Minister Mbalula was speaking during a road block along the N3 Highway in Heidelberg, Johannesburg on Thursday, 04 July 2019 ahead of the Durban July horse racing event which took place on 06 July in Durban, KwaZulu-Natal.

Addressing traffic officers he said: ‘you are doing a thankless job but we are going to work together to make sure that our roads are safe,’ said  Minister Mbalula.

“All wrong doers must be taken off our roads to ensure safety and if you let go of any act of lawlessness, it will affect other people,” he added.

On the day, 1262 vehicles went through the roadblock, two motorists were arrested for fraudulent documentation, 23 unroadworthy vehicles were impounded and 41 traffic fines were issued for minor offences such as expired discs.

“As government, we want road safety to be maintained daily throughout the year not only during Easter or festive seasons,” said the Minister.