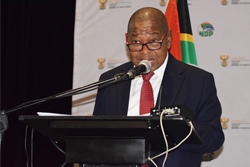 The Minister of Transport Dr Blade Nzimande has called ‘upon all South Africans especially the historically disadvantaged, to seize this opportunity, by getting closer, and not fear the oceans because, the oceans, with so much to offer, awaits everyone’.

These were Minister Nzimande’s closing remarks at the end of Maritime Transport Dialogue held at the Southern Sun Elangeni – Maharani Hotel in Durban. The dialogue was over two days (28 Feb – 01 March).

“I can conclude that the purpose of this dialogue has been accomplished”, the Minister expressed his satisfaction at the success of the dialogue.

He said the dialogue was a call to action by all stakeholders and interested parties, to transform our plentiful ocean endowment into an Economic Zone.

However Minister Nzimande expressed his displeasure about the matter of fronting.

“Issue of fronting in the maritime sector is a matter to be dealt with decisively. This is the matter that undermines our efforts to transform this industry. As we know, fronting is a deliberate circumvention of the B-BBEE Act and the Codes. This is a serious offence that deliberately mis-represent our transformation objectives.”

These are some of the points from the Declaration that was made at the end of the Maritime Transport Dialogue: