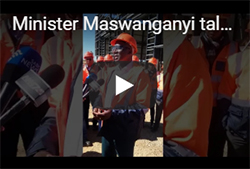 The factory, is where the Passenger Rail Agency of South Africa (PRASA) will be manufacturing new, state-of-the-art Metrorail commercialised passenger (Peoples’) trains.

The new Metrorail (Peoples’) trains, twenty of which are already in South Africa were manufactured in Brazil. His Excellency, President Jacob Zuma officially launched these new state-of-the-art Peoples’ trains on the 9th May 2017 on the Pretoria – Pienaarspoort (Northern corridor) stations route.

PRASA will oversee the manufacturing of components for the new trains at the plant, which will manufacture a total of 580 trains in South Africa.

The new Metrorail (Peoples’) trains are part of the new fleet that will be rolled out by government over the next 10 to 15 years as part of PRAS’s Mordernisation Programme, creating an affordable, accessible, safe and reliable transport system in the country.

The manufacturing of the new trains will significantly improve the rail system in the country while creating thousands of sustainable jobs and job opportunities, a promise made by the President in 2012.

The Minister will be joined by the Acting Group CEO of PRASA, Mr. Lindikaya Zide and the Group CEO of Transnet Mr. Siyabonga Gama respectively.