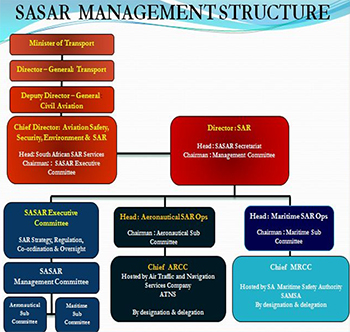 The aeronautical operations component of SASAR is headed by the Head of SAROPS who is an ATNS official. The ARCC is situated at Johannesburg International Airport and staffed by employees of the ATNS. The Chief of the Aeronautical Rescue Co-ordination Centre is the Manager of the Air Traffic Control Centre in Johannesburg.

The Chief of the ARCC is responsible for ensuring the smooth running of the ARCC. All neighbouring territories within the aeronautical search and rescue region, namely Namibia, Lesotho and Swaziland are considered to be permanent RSC's. Each Air Traffic Service Unit within South Africa can be appointed as an RSC on an ad hoc or temporary basis. 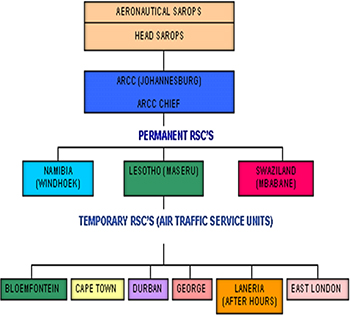 Unlike the aeronautical component of SASAR, the maritime component has a diversity of role-players. For this reason, it was necessary to create and appoint an incumbent to the post of Manager: Maritime SAR Operations that is attached to the agency, SAMSA. This person also serves as the Head of Maritime SAR Operations and his main duties and functions are to ensure the efficient operation of maritime SAR in the South African Maritime search and rescue region.

The permanent Rescue Sub centres are strategically placed along the coast with each Port Control office acting as such. We have about 7 port control offices acting as permanent RSC's namely, Cape Town, Walvis Bay, Saldanha, Port Elizabeth, East London, Durban and Richards Bay. The RSC's also report to the Head of Maritime SAROPS. The permanent RSC's only handles operations that are not major in nature and are within their scope and capability. If an operation becomes too major, the operation is handed over to the MRCC.

If a SAR operation becomes too complicated or big to be handled by them, the operation is handed over to their respective permanent RSC. They are responsible to the Chief of the RSC in whose area of responsibility they are stationed e.g. the NSRI of Port Elizabeth is responsible to the Chief of the East London RSC. We have about six institutions/organisations serving as dedicated alerting posts and staffed 24 hours a day, namely, Air Traffic Service Units, Port Control Offices, Coastal Radio Stations, South African Police Stations, the MRCC and of course the ARCC. 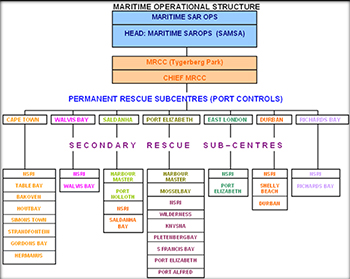